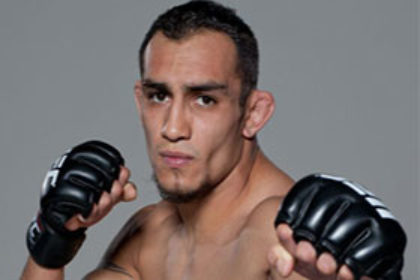 Tony Ferguson grew up in Muskegon, MI, of Mexican heritage, As a southern California native living in a small Midwestern town, Fergusons father enrolled him in sports at a young age to help him make friends and fit into his new surroundings.

Ferguson took to athletics extraordinarily well, and went on to earn 12 varsity letters at Muskegon Catholic Central High School in football, baseball and wrestling. He was the starting quarterback on the 2002 state football champions and was a three-time All-State selection in wrestling, winning the 152 lbs division in 2002.

After high school, Ferguson enrolled at Central Michigan University before transferring to Grand Valley State University. He also did a stint at Muskegon Community College. He went on to garner All-American honors twice, winning the national championship in the 165 lbs division once.

Ferguson moved back to California to be closer to his extended family, working in marketing and sales during the day and picking up shifts as a bartender at night. One night while tending bar, a patron talked to him about his wrestling background and invited him to work with some young mixed martial arts fighters with their wrestling. Ferguson immediately fell in the love with the sport and hasnt looked back since, devoting himself entirely to his MMA career.

Ferguson had signed with the UFC in 2011 to compete on the The Ultimate Fighter: Team Lesnar vs. Team dos Santos.

Ferguson was the third pick of Team Lesnar and the fifth overall. Ferguson was matched up with alternative, Justin Edwards, for his preliminary bout. After a back and forth first round, Edwards was able to take Ferguson down. But while on the ground, Ferguson landed a devastating upkick that knocked out Edwards. With the win, Ferguson moved on to the quarter-finals.

For his quarterfinal fight, Ferguson fought Ryan McGillivray, quickly earning the KO win after catching McGillivray with a short uppercut and following up with ground and pound. The win moved him into the semi-finals where he faced his teammate, Chuck O’Neil. Ferguson defeated O’Neil in the final episode via TKO in the third round, sending him to the finals to face Ramsey Nijem.

Tony first started using DFX products during his rehabilitation, after suffering an injury during a bout against rival Michael Johnson. Since his full recovery Tony continues to implement our products in his every day routine. DFX is the perfect tool to aid in the strengthening of his fingers, fore arms and shoulders. He is a proud member of Team DFX.