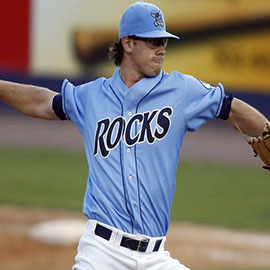 I grew up in a little town in Southern New Jersey called Haddonfield. Right outside of Philadelphia, PA, so I’ve always had big dreams of becoming a professional anything: Football with the Eagles, Basketball for the 76ers, and baseball with the Phillies.

I managed to go on scholarship to the Pennsylvania State University and started all three years I attended. Was awarded All Big Ten honors along with Academic All American. After Junior year, I was drafted in the 2012 draft in the 29th round by the Kansas City Royals, so I left school early to join their minor leagues. First season I played with the Burlington Royals, a short season rookie ball team, and we went to have a very successful year, only to lose in the final championship game.

I was now a closer (instead of a starting pitcher as I was in college) and posted a 2.63 era with 12 saves. I next attended the Instructional League at the Royals spring training facility in Surprise, AZ and started the 2013 season in an Idaho Falls Chukars uniform after Spring Training (another short season team), but only staying for three days. I then got promoted to Lexington Legends, our single A affiliate, and hope to keep moving up as I mature as a pitcher. Through this whole process, you learn pretty quickly how tired your body gets after a long season.

I’ve never thrown as much as I do in the minor leagues, and I need to keep myself in top physical condition to compete to my fullest extent. The gyroscopic resistance in the Powerball creates the perfect workout for grip strength and shoulder stability. I always finish a workout with the V Power for a nice forearm burn. It has helped with my dexterity and grip strength , which has translated into my game. I also wear the magnetic bracelet every day. I  can’t wait to use DFX’s other products! ”