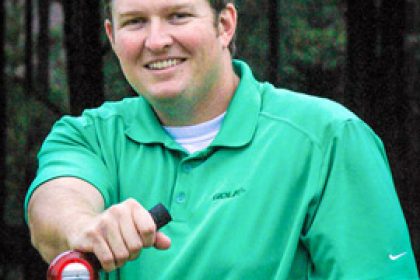 Pro Long Driver and DFX pro staffer, Andrew Williams, is, arguably, one of the longest golfers on the planet with a club-head speed of 140 plus miles per hour and a ball speed of over 200 miles per hour. He regularly hits drives of over 400 yards.

“Since 2010, I have set out on a quest to become the Re/Max World Long Drive Champion and the longest driver in golf. At first, I had no idea how to become longer off the tee. I did bench press, pull-up, etc., and nothing seemed to work. In early 2011 at a sporting goods store, I picked up a power ball, and it has been my secret weapon ever since. Since that time, I have used my gyro everyday and gained an average of 10 miles per hour club-head speed and 30 yards off the tee with my new personal record now at 410 yards in competition and a max club-head speed of 147. I would urge anyone who wants to be a longer and more accurate golfer to give DFX gyro a try.”