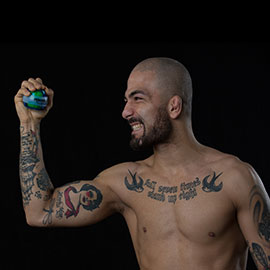 Hamid Khorassani (born August 27, 1982), professionally known as Akira Corassani, is a Swedish mixed martial artist currently competing as a featherweight in the Ultimate Fighting Championship. A professional MMA competitor since 2007, Corassani has made a name for himself fighting mainly in Western Europe. He was a competitor on Spike TV’s The Ultimate Fighter: Team Bisping vs. Team Miller as a member of Team Bisping.

Corassani began martial arts when he was six years old. He also started playing football at the age of 14 and that was his focus in life until he began MMA at the age of 22. Corassani is vegan.

Corassani began fighting professionally in 2007, and traveling all across Europe to compete. Since making his professional debut, Corassani has built a record of 10–3–0 (1 NC). Currently, he is training in New York with Renzo Gracie Combat Team.

In episodes three through five, Corassani was shown multiple times in altercations with Team Mayhem fighter, Dustin Neace. The two would later be paired in a bout against each other in the preliminary round. During the fight, inside the first round, Neace applied a heel hook submission that looked like Corassani tapped to; however referee Herb Dean did not stop the fight and Corassani was released from the hold. Corassani went on to defeat Neace via a majority decision after two rounds. After the win Corassani moved onto the semi-finals.

Corassani was chosen to fight Team Mayhem fighter, Dennis Bermudez, in the semi-final round. The fight would determine who would move into the final round of the featherweight tournament. Though Corassani controlled throughout the fight with effective striking, scoring several knockdowns, Corassani lost the fight via submission (guillotine choke) in the first round. When the referee stopped the fight Akira had lost consciousness and had to be told that he lost the fight.

Though Corassani lost in the semi-final round, and did not win the show, he signed an exclusive deal with the UFC. He was set to make his debut on December 3, 2011 at The Ultimate Fighter 14 Finale against Steven Siler. However, after an injury in training camp, Corassani was forced to pull out of the bout and was replaced by newcomer Josh Clopton.

Corassani was expected to make his UFC debut in his native Sweden against Jason Young on April 14, 2012 at UFC on Fuel TV 2. However Corassani pulled out of the bout due to injury.

Corassani won his UFC debut via split decision against Andy Ogle on September 29, 2012 at UFC on Fuel TV 5.

A bout with Robbie Peralta, previously linked to UFC 156, was moved April 6, 2013 at UFC on Fuel TV 9, after an illness sidelined Corassani for a time. He won the fight by unanimous decision.